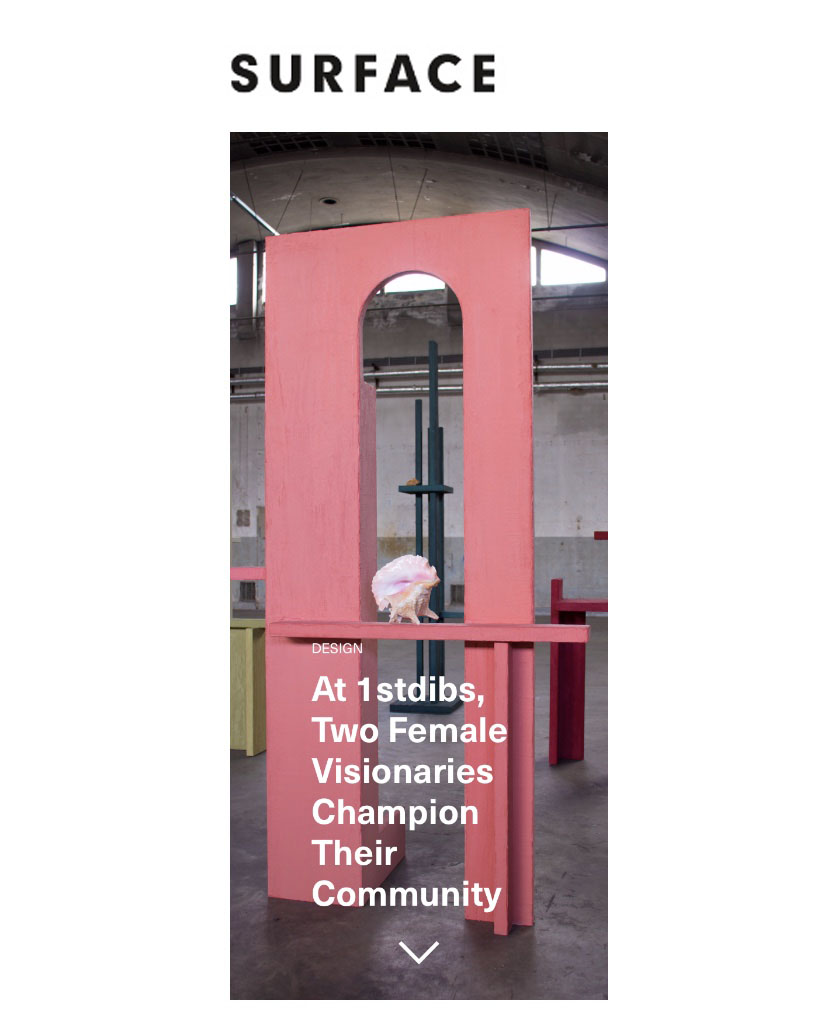 01 May surfacemag – At 1stdibs, Two Female Visionaries Champion Their Community

It’s no secret that architecture and design share a fraught relationship with gender. Wage gaps still pervade most firms—even Studio Gang founder Jeanne Gang, despite her ideological commitment to gender parity, identified a small pay gap between men and women at her firm, which she promptly corrected. Meanwhile, a harrowing survey of more than 1,200 architects determined that 85 percent of women have experienced sexual harassment at the office. And when once-beloved figures such as Richard Meier are rightfully exposed for predatory workplace behavior while a list of Shitty Architecture Men circulates, one question remains: How do we move forward?

For Female Design Council (FDC) founder Lora Appleton, who also masterminds children’s design gallery Kinder Modern, this issue is of particular urgency. During NYCxDesign 2018, she teamed with Egg Collective to co-curate the beloved Designing Women exhibition, which shone a much-needed spotlight on standout female design talent. (One participant had work placed in a major art museum after the show.) In Appleton’s eyes, women often fall victim to surface-level impressions—images and stereotypes the patriarchy makes it difficult to shake.

That’s why, during this year’s NYCxDesign, she’s embarking on a similar mission to champion female designers who push the envelope in terms of form, material innovation, and preconceived notions of how objects should look and feel. When online marketplace 1stdibs opened their first bricks-and-mortar gallery space in Chelsea earlier this year, a lightbulb moment ensued: Why not give these women a platform to showcase their talents? Thus birthed the idea for “Deeper Than Text,” an exhibition of 19 female designers who hail from such far-flung locales as Beirut to domestic hubs like Los Angeles. The show seeks to redefine how female designers are perceived by transcending the mundane and positioning their objects and artworks as deep and dynamic—much like the women who create them. We sit down with Appleton and 1stdibs’ Cristina Miller to learn more.