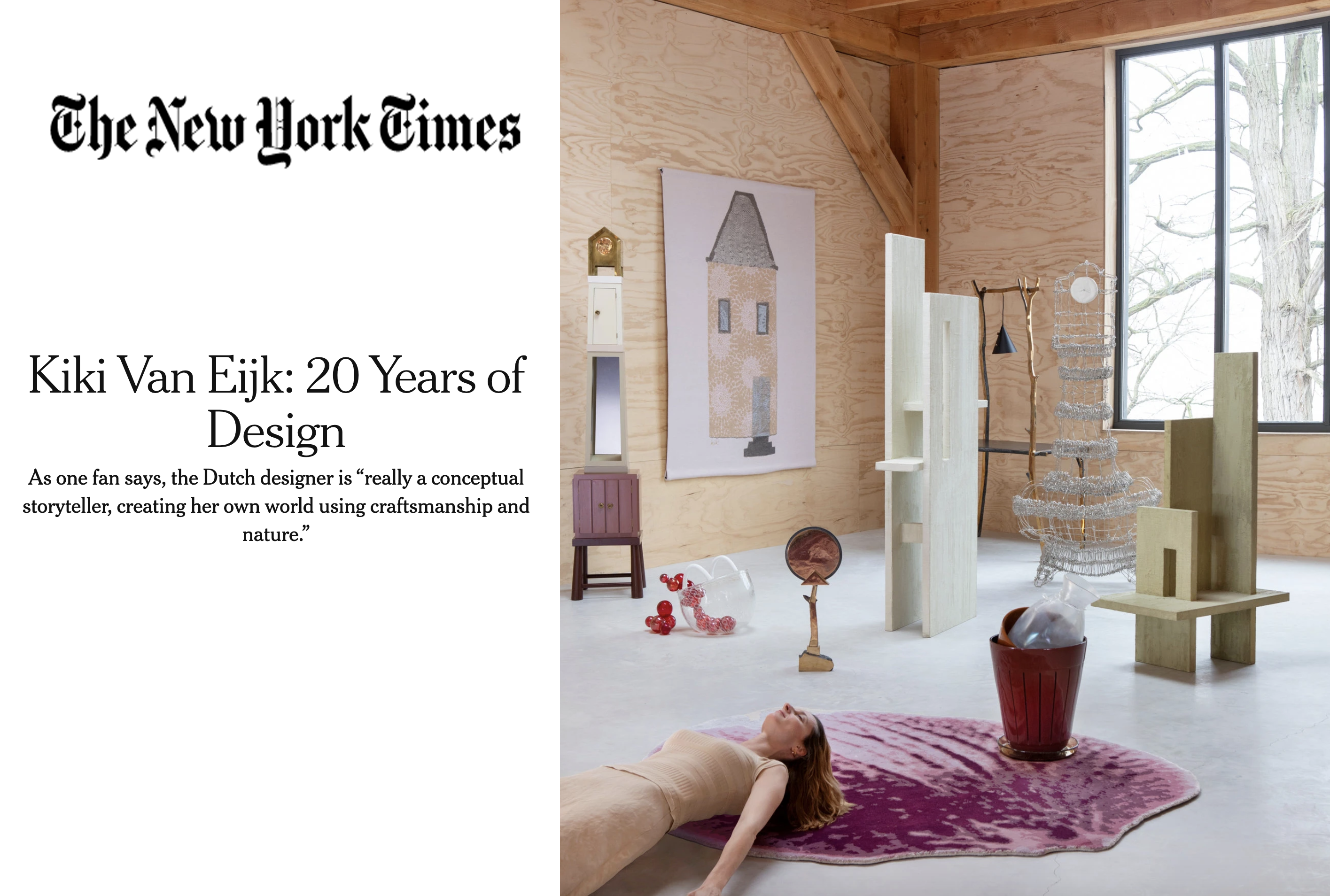 As one fan says, the Dutch designer is “really a conceptual storyteller, creating her own world using craftsmanship and nature.”

EINDHOVEN, the Netherlands — If one theme unites the work of the versatile Dutch designer Kiki Van Eijk, it’s that there is no one theme.

For 20 years, she and her collaborators have produced lighting, sculpture, furniture, household objects, wall hangings, carpets and more using materials ranging from ceramics to textiles.

Ms. Van Eijk, 42, designs at Kiki & Joost, the studio and workshop she shares with her husband, Joost Van Bleiswijk, 44, another prominent designer. “Joost and I are very close and often work together,” she said. “With him, I’ve grown and become more daring. But it’s also really important to have your own identity.”

At the studio, a team of craftspeople helps her to realize about half her projects; the rest are created in consultation with the commissioning clients. Ms. Van Eijk said her studio used the pandemic lockdown in the spring to come up with new ideas: “We just keep positive and will see how things evolve.”

Ms. Van Eijk believes that every project requires a different approach, and she prefers to be free to decide it. “That’s why maybe my work can be confusing to people at times,” she said with a laugh. “So, sorry for the confusion. I don’t mind when not everything is clear.”

Here is a look at some of her most notable projects.

The felted wool rug, Ms. Van Eijk’s graduation project from Design Academy Eindhoven, started her career. She said she avoided creating anything similar for years because “I didn’t want to just be the girl with the rugs.”

A mantel clock in white ceramic that has the look of cloth, it was the first piece in the Soft line, still in production. Ms. Van Eijk stitched the original form in felt, then made a mold with the help of Cor Unum, a Dutch ceramics manufacturer. A black version debuted this year.

Commissioned by Claudia Pignatale of Secondome Design Gallery in Rome and shown at Design Miami/Basel and other fairs, the collection of seven objects illustrated Ms. Van Eijk’s creative range. The novelties included a cart, cabinet and bird cage, produced in unexpected combinations of metal, wood, ceramics, textiles and more. Ms. Van Eijk made the original models, which then were scaled to life-size proportions at Kiki & Joost.

Ms. Van Eijk knotted brass wire to create an airy skeleton for this grandfather clock of sorts. Then Murray Moss, who ran the Moss design shop in New York City at the time, commissioned a group of mantel clocks made with the same technique but in 14 different finishes. Since then, the Floating line, Ms. Van Eijk’s most commercially successful, has expanded to include lampshades, candleholders and more. “I’m proud that it’s still up-to-date and people still fall in love with it,” she said.

Ms. Van Eijk visited the Berengo Glass Studio in Venice several times to collaborate with a master glass blower for a set of seven glass pieces representing the essentials of life, a collection called Drink! Eat! Fun! Rest! Think! Dream! Love! Its unpredictable colors and shapes were “very intuitive, based on the words,” she said.